I sometimes buy a store brand loaf of wheat bread -- not necessarily because I am cheap but because it is less sweet than the name brands I know. If I have an egg salad or a tuna salad sandwich I like soft, bland bread.

This morning I decided to make some toast with some of that bread. This was the last heel of the loaf. 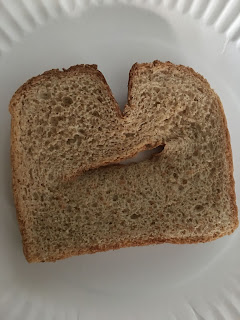 Clearly, it has a mouth.

Of course I had to amuse myself by turning it into a bread puppet. 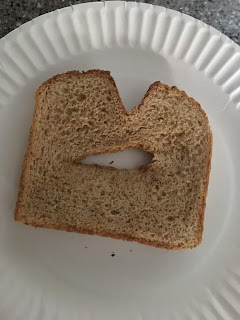 Some people are not nearly as amused by me as I am by myself. I've noticed that a lot.

Don thinks this is the funniest thing ever and he swears I have way too much time on my hands. He suggests I get a job.

I made a few of these bags to take to the grocery store or farmers' market so I don't have to use plastic bags. 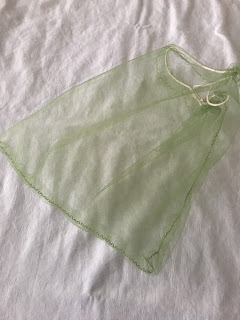 A little bit of netting and no more than five minutes sewing time.

Hey, maybe I could get a table at one of the Farmers' Markets and sell produce bags?

Nah, that sounds like too much work. I'm retired and enjoying it!
Posted by Olga at 12:43 PM 11 comments:

Road work has become the bane of summer although it is certainly badly needed around here. Vermont winters are not kind to streets and roads and where I live now is no longer the acres and acres of dairy farms that it once was.  And infrastructure has not kept up with the population and the number of cars using area roads.

The road work at the end of the development drive forces one lane traffic and goes through the night. Eventually the widened road with turning lanes and traffic lights should relieve some stress. In the meantime, noise and slow going
. . .  we put up with it. 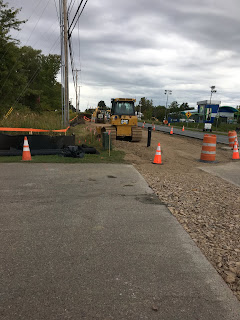 I made a trip to Boston -- lots of road work along the way too. I went for a doctor's appointment. I had a laser procedure that straightened out my badly out of alignment septum last December. Yesterday the doctor zapped remaining swollen tissue that is expected to shrink down over the next few weeks as a result.  Finally, free breathing should be fully restored. I have to take an antibiotic and use saline rinses for a week, but it was a completely painless procedure this time and I am convinced I can already tell the difference in a good way.

I did happen to think to ask the doctor if I would now be able to lay on my back without the feeling of choking on post nasal drip. He said, "No that's something different." So he stuck a camera down my throat through my numbed out nose and immediately diagnosed reflux disease, which made perfect sense once I read the symptoms.  It did not make me happy, but in the grand scheme of things I can't complain. It hasn't progressed to the point of damaging my esophagus.

One of my friends fell in her kitchen and shattered her hip. I have other friends my age who are dealing with far more serious medical problems that do impact quality of life. So I am going to consider myself lucky that I can take a pill and then go about my daily activities.

I had a nice visit with my son over a tasty dinner the other night. The event was marred when his front tooth broke though. He has a triangular chip (hard to make a lasting repair) in that tooth from a punch to his face while he was resisting an attempted robbery/mugging years ago. He has always had a very certain sense of right and wrong which is not a bad thing except he thought he could point out the error of his ways to the burly would-be mugger. Things we learn the hard way.
Posted by Olga at 4:09 PM 10 comments:

Felicity Huffman will pay a fine and do 14 days of jail time for her part in the college admissions cheating scandal.

I understand that there is some kind of backlash -- a joke of a sentence, not tough on crime, another example of money buying privilege, etc. One guy tweeted that he could buy a gallon of milk on the day she enters prison and it would still be fresh when she gets out. People are strange.

Now, my thought is that punishments should fit the crime. How about having her tutor high school students in an inner city school who are trying to be the first in their families to apply for college? How about sentencing her to two weeks of substitute teaching? Oh, wait, that would be cruel and unusual punishment, substitute teaching.
Posted by Olga at 7:42 AM 10 comments:

Walking in the Woods

Through Meet Up I have been taking some short group hikes. This past Sunday was a perfect day for such a walk. We started with some outdoor yoga and then headed into the woods. 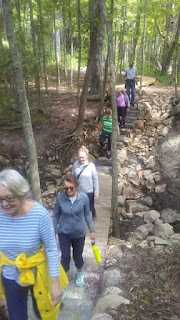 It looks as though I am leading the pack but I really wasn't. 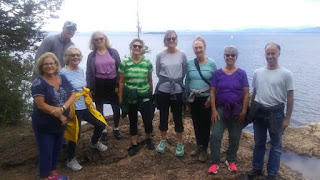 The trail went through woods along the lake. 50+ Keeping Active group. I don't mention that I am in the 70+ category.
Posted by Olga at 6:30 PM 9 comments:

I was avoiding news for the later part of last week, but one of Diane's friends who lives on the east coast of Florida called and let me know I should be worried. We did turn on the weather channel for a while but, really, there was not a darn thing I could do about the hurricane but pray.

But it is a terrible event and I am saddened and concerned for people anywhere in the path.

Mike and I spent a number of vacations on Abaco in the Bahamas. We stayed in Marsh Harbor. I don't want to try to imagine what is left there. My heart just breaks at the devastation.

I went to visit my friend Diane in southern New Hampshire. She has a lovely cottage on a pond surrounded by mountains and quaint little towns where we can hike and explore. 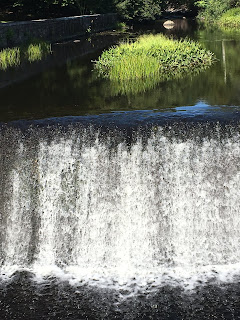 Near the bridge in Peterborough

I left my computer at home and never bothered to sign onto the internet. Phone service was spotty at best. I was unplugged and what a relaxing time that afforded!

We explored Frye's Measure Mill, Cultural Cocoon, and a number of other little shops and antique stores. I did make one small purchase. 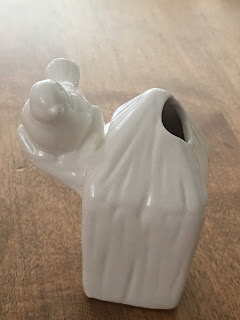 
As usual when we get together there was good food, some wine, long conversations, games, a play, and walking. 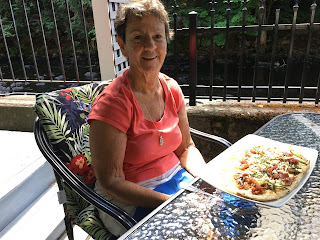 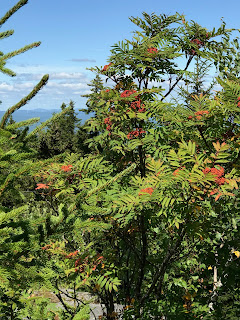 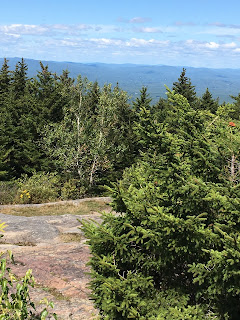 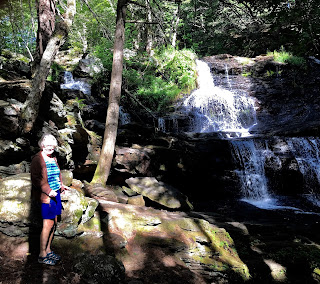 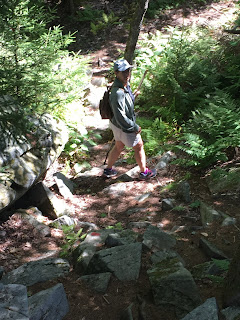 The play we saw was A Doll House, Part II. Diane is a long time subscriber to the Peterborough Players and we stayed for talk back with the cast after the show. I really enjoy summer playhouse productions as a rule and this one did not disappoint. 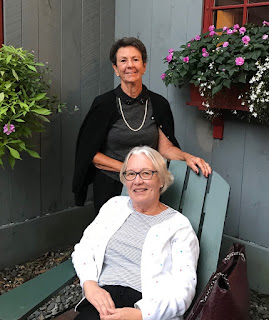 I know retirement seems like full time vacation, but this was just a great treat.

Diane's husband Bill had a woodworking hobby. This is one of his creations: 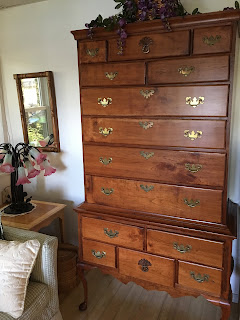 Pretty talented for a hobby!