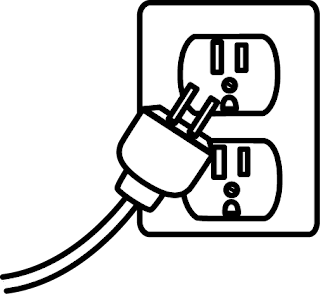 This past week I noticed that the night light in the convenience half-bath downstairs was out. Hmm, I thought to myself, time to change that bulb.
Of course, I didn't get around to it right away, but the next day I was going to dry my hair and the hair dryer remained silent. Then I noticed that the little light on the electric toothbrush charger was out.

I plugged the hair dryer into the outlet by the second sink.  Nothing.  I took it downstairs and again, nothing.  Every other plug and switch seemed to be working.  What other explanation could there be?  The bathroom wiring was shot, the wires were frayed and disintegrating, about to cause a major fire.

Have I ever mentioned the fact that I have an irrational fear of electricity?  I swear I was killed by lightning in a previous life.

After several minutes of panic, I thought to check the circuit breaker box. Everything looked okay. I saw the new outlets in the kitchen which all had GFCI buttons.  The bathroom outlets had not been updated but I figured there must be
a GFCI for them somewhere.  I looked in the circuit breaker box again and found a switch marked GFCI.  I summoned all my courage and poked at that switch (very tentatively, I am sure, because of that irrational fear of electricity).  Nothing happened.

I returned to my theory about a life destroying fire about to burst through the bathroom walls.  I called an electrician in a state of panic.  He came right away.

He was here for maybe twenty minutes in total.  He showed how to operate a circuit breaker switch -- you have to turn it to off and then on.  I paid him $140 and went to dry my hair.

Lesson learned.  Expensive lesson, but learned.
Posted by Olga at 8:20 AM 11 comments:

We went to the Ringling Museum of Art on Monday.

The next day we were in the pool and a woman asked about what we were doing and I mentioned the trip to the art museum.  She looked at my grandson and commented "Well, THAT must have been boring!"

In fact, not at all.  Both of the kids were very much attentive and appreciative, very much enjoying the experience and making serious observations.  I would not have taken them if I thought it would be otherwise.

My grandson continues to paint when he is not in the pool or the Gulf.  The trip actually had the influence of turning his effort toward human figure. 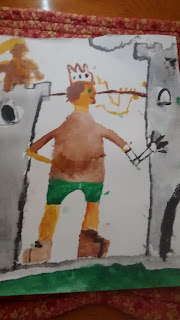 (after statue of David) 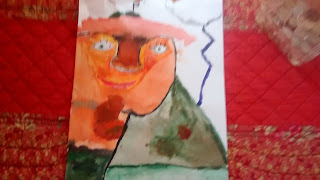 This is amazing to me because a year ago he could not hold a pencil in his hand.