I Googled: "Florida landscape plants for snowbirds" and I got a lot of suggestions.

One plant that I had seen at one of the nurseries and liked was called Xanadu.  It is a type of philodendron.  It came up on the search.  I put two in the front planter. 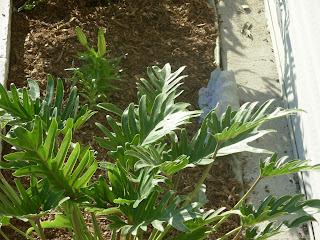 There are supposed to spread and mound, up to five feet wide and two to three feet high.  I think that will be about right once it is established. 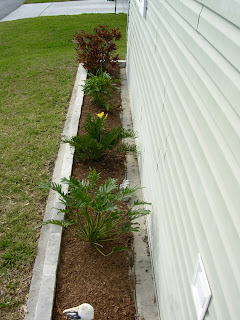 Of course that might take a while.  I took out two shrubs that were playing dead.  I think they were actually strangled by the air potato plant that snuck into the planter.  I also took out the crown of thorns plants because I just didn't like them.  i thought they might grow on me, but they didn't.  Let's hope the new plants do grow for me though.

I do hope I can get some more landscaping done, but if it is not in the cards for this year, there is always next year.

For the past three years I have brought my own laptop to Florida. (Prior to that, Mike and I shared one.)

In each of those three years, this one included, something has happened to my computer.  First there was the complete crash on the Dell.  It was still under warranty.  But I lost a great deal of data that I had not backed up.  Lesson learned.

Last year my MacBook Air caught a virus.  I took it to a small shop for repair.
If you ever have computer problems anywhere near Venice, FL, Microtek Systems on South Tamiami Trail is the place to go.  They are wonderful.

The guy told me he had never heard of a Mac with such a virus.  He shook his head and said that the problems some people could have always surprised him.

This year I tried to get on my checkbook app.  I use online banking but I also keep track of my checkbook spending on a separate app because I can make a mess of a checkbook register and the app can find errors better than I can.  Well, when I tried to open the app, something else opened.

I took it immediately to the friendly folks at Microtek.  I showed them what was happening.  I got that same head shake and the same wonder about how I managed this particular problem.  Haha.

But they fixed it easily and I was happy once again.

I do have to think, though, that there is something in the Florida air that my Vermont computers have an allergic reaction to each spring.


I have been contemplating some Florida landscaping, tricky since I am not here full time.  The front of the house gets bright sun all day and the planter is against the house so I don't want anything that will grow to high or too bushy.

I have been visiting a couple of area nurseries to get some ideas and some advice. 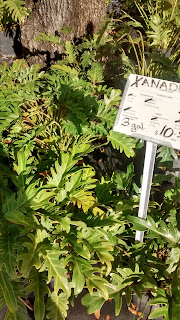 I have taken a bunch of pictures of some possibilities. 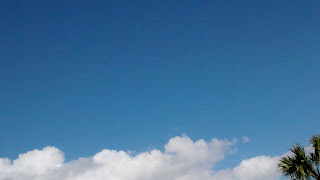 Apparently my camera get clicking.
I got a lot of pictures of the sky and the walkways. 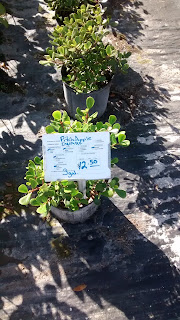 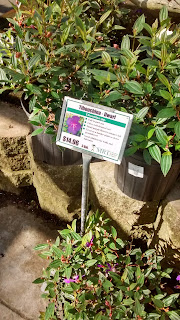 I really thing this stretch along the east side of the house needs some attention. 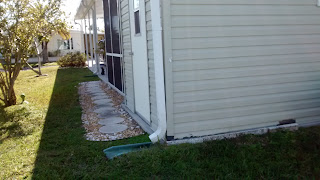 Some low growing palms and then something colorful? 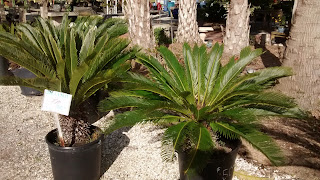 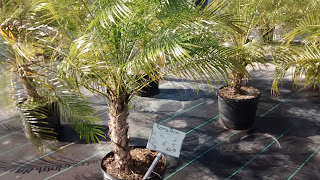 Sounds drift through open window
even before the morning light.
Birds sing out at hint of dawn—
chirp, tweet, trill, whistle,
a staccato caw-caw-caw. 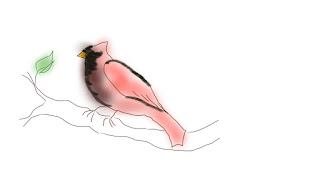 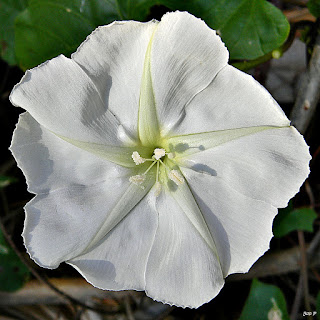 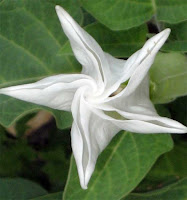 I tend to learn about things the hard way.  For instance, many years ago, in my first house, we had a fire in the dryer vent.  Fortunately, it was caught almost immediately.  A new vent was installed and no damage was done to the house itself.

Once I learn something like that, the lesson sticks with me. 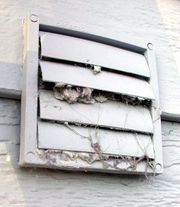 Google image
Seeing something like this is not a good thing.

I decided to clean out the dryer vent yesterday.  When I took the vent off, it cracked and fell into many pieces.  Florida climate is pretty harsh on building materials generally.  Plastic does not stand a chance.  Fortunately there is a Lowe's nearby so I went to get a new vent cover.

I thought that I was getting the exact same cover, but of course nothing is ever simple in the home maintenance department.  The screw holes didn't match up.
Go find the drill.

I was almost felt the need to go ask my neighbor for assistance.  A brief moment before my natural stubbornness kicked in.

I had just put in a load of towels to dry when the neighbors called and invited me for an impromptu pizza and drinks evening.  I went over.  Not too much later I looked back to check on my place and noticed the car port was glowing red.  Yikes!!

It turned out to be reflection of truck brake lights and all was well.

Today I have been washing windows, which led me to notice a screen in need of repair and then some shrubs in need of attention.  Home maintenance never ends. 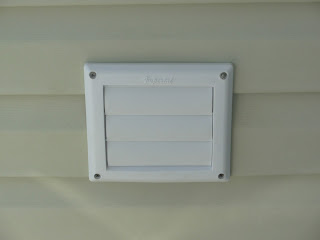 But one job is finished!

Sometimes I find strange things on my computer.

I suspect this is my grandson.  He knows more things to do on my computer than I do. 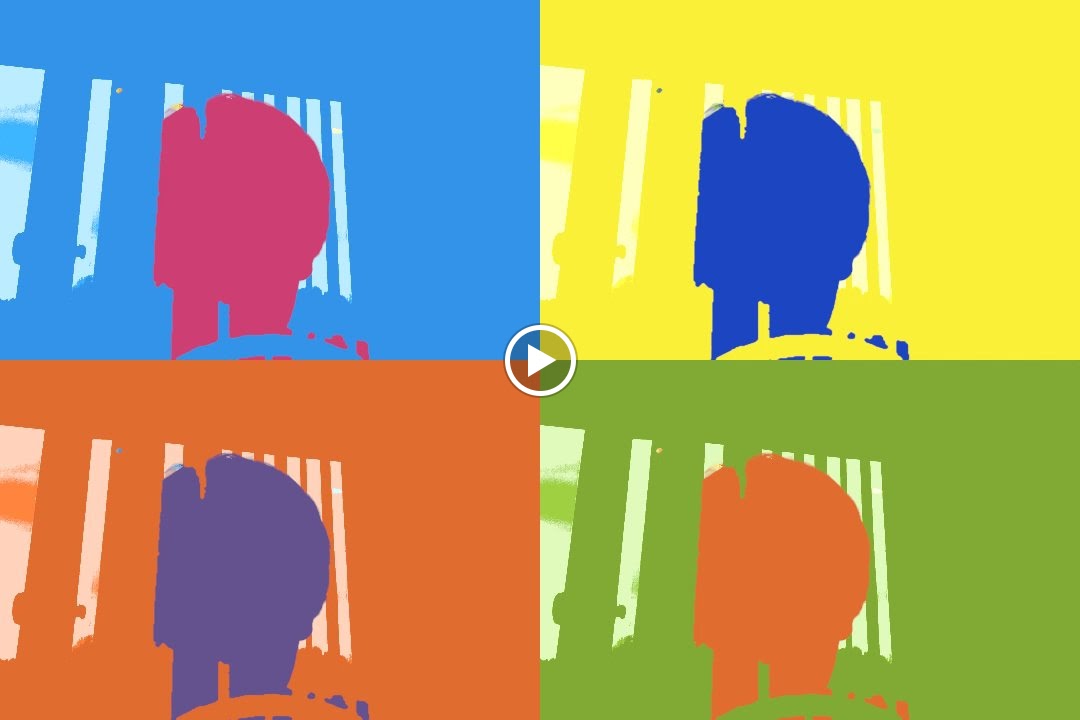 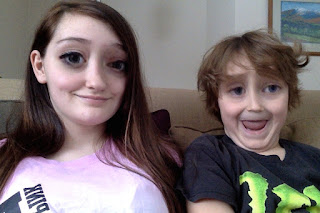 I was not wrong about the red tide.  Yesterday we stopped at a park near the Gulf and lots of people were coughing.  There was an "airing of the quilts" event going on so we did spend some time looking at that before heading off for Shamrock Park and a long walk.  We played some games--something I am terrible at.  We went out to eat at funky Snook Haven--ribs.  The rain held off at least while we had our walk and did not interfere with the indoor activities.  Then we were on to a concert, a tribute of Pete Seeger.

We tried a walk on the beach this morning but it was far too cold and windy.  The beach was littered with dead fish.  And the red tide was causing respiratory distress.  We took a long walk of the Venetian Waterway instead then went to see the birds nesting at the Venice Rookery. 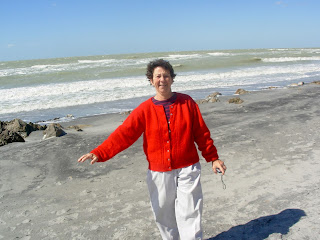 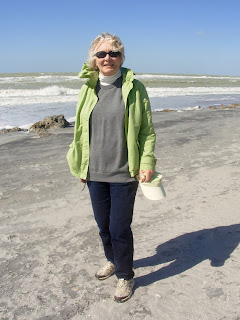 Bundled up and wind blown. 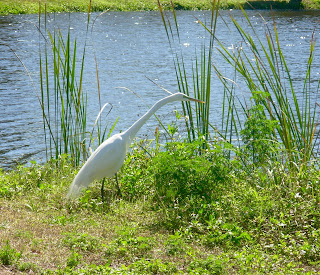 
We had a wonderfully fresh fish dinner at Captain Eddie's and later shared a glass of wine while watching Downton Abbey.

I do wish it would warm up--or at least have the wind die down so we could do some biking.  Still, it is nice to have company.
Posted by Olga at 10:17 PM 14 comments: Links to this post

I wanted to go for a walk on the beach this afternoon.  I parked my car and started to walk toward the water.  I also started coughing like crazy and then sneezing.  I am predicting that there will be a red tide warning in the next day or two. 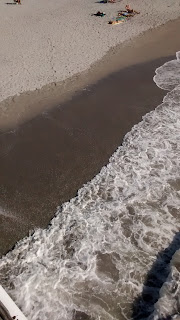 The water was kind of murky anyway.

I checked the air quality report on the library web site and it was listed as good.  Well, I consider myself an early warning system for the presence of red tide.  As soon as I left the beach the coughing and sneezing stopped completely.

My friend Diane is coming for a visit on Friday.  I am very excited.  I found a good place to rent a bicycle, I have tickets for a concert, there is a Greek festival in Sarasota, an orchid show and a quilt show in Venice, restaurants to explore, and I do hope we will get some beach time.
Posted by Olga at 7:27 PM 11 comments: Links to this post

Then I kind of figured out that it makes a difference to the vendor.  Credit card fees apply to the seller, they don't just make money off the interest charged to the buyer who doesn't pay off the full amount each month.  On the other hand, the credit union loses with debit use and makes the fee from sellers so they always encouraged members to use the card as a credit card. 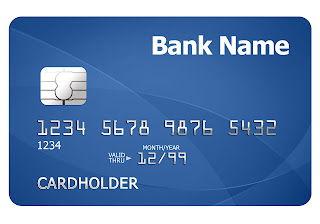 So generally I try to use my debit card for small, local vendors.  I always use my credit card for gas and restaurants and online purchases.  I didn't have much of a reason other than that is how I do it, but then I came upon this article about 8 dangerous places to use a debit card.

Who knew?  But I will congratulate myself for having good instincts anyway.