Joe, the Cranky Old Man, recently wrote a piece entitled "Window." It told a story of a brush with near disaster that turned out okay by some miracle. If I may quote, his conclusion was:

So, all you young parents, the reason your own parents don’t think you are capable of successfully raising a child is they know from experience that if you let your guard down for a second, stuff happens.  They fear you may not be competent, because they probably know the fact that you are alive to be a parent at all is a matter of their own dumb luck.

Dumb Luck must be my secret middle name. Many miracles have occurred and my children should be far more thankful to a higher power than I suspect they are.

For example (and I may have shared this story before):

My son was about a year old -- still in diapers, walking, but not totally verbal. We were visiting my first husband's  parents who lived in an upstairs apartment of an older house. I had cooked a big breakfast of bacon and eggs. My mother in law went to work and the rest of us went into the living room to watch morning news and drink the second cups of coffee. At some point I went back into the kitchen and discovered it filling with smoke. Apparently I had not turned off the gas burner completely (I'd only ever used an electric stove before) and the frying pan was aflame.

My father in law's impulse was to grab the flaming pan and run through the kitchen and a hallway and then down a flight of stairs. Fortunately my husband stopped him and clamped a lid on the pan to extinguish the fire. My FIL turned his efforts to throwing open all the windows. It was in the spring and he had taken off all the storm windows but had not put up all the screens.

It was the nurse who cared for the women across the street. She was wheeling her patient out onto their sun porch when she noticed something concerning. "Do yo know that there is a baby running around on your porch roof?" she asked my father in law. He started screaming. Maybe continued screaming, it was a long time ago.

My husband very calmly went to the dining room window and said, "Hey, Kevin, come here." And Kevin did and we closed the windows.

Three miracles that day alone -- the house didn't burn down, my father in law did not die of a heart attack (although he did pour himself an after-breakfast drink), and my son did not run off the edge of a roof.


*****
I have sometimes wondered why it is that we seem to have a tendency to move onto new relationships and yet still end up with the same personality in the new person.  Ability to stay calm, think clearly, and solve a problem -- probably more than a good thing I gravitate towards those qualities in significant others.

It is time for me to be getting ready to close up the house and pack up for my return trip to Vermont.
But it was way too nice a day not to go to the beach. 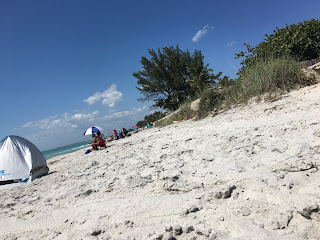 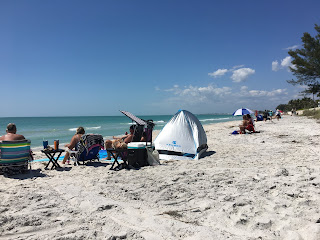 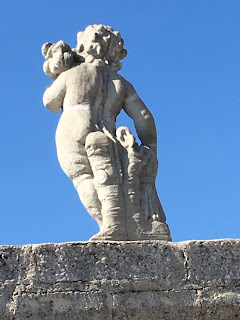 I was going back because I had a follow up appointment to my sinus procedure in Boston. On Friday, the doctor's office called and rescheduled me for June. Grr. I could have stayed longer had I known that before buying my ticket.

I suppose beaches all look the same -- sand, sky and water. Other beaches I visited this winter: 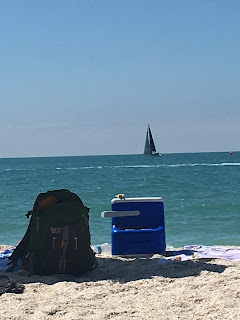 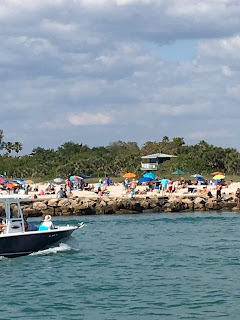 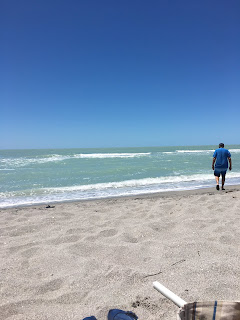 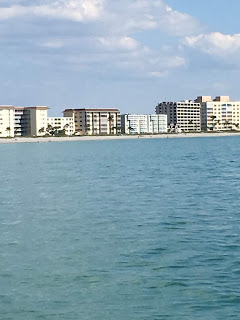 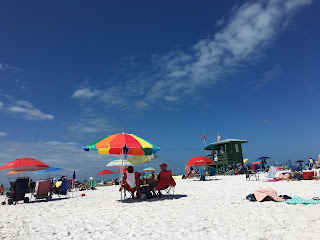 Perfect ending to a day at the beach: 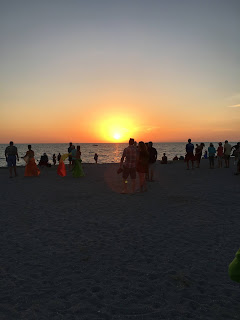 I am not big on Easter celebration so I wanted to help those who do celebrate. I volunteered to do breakfast and clean up for the Family Promise program. This is a program that provides temporary housing for families with children in area churches in addition to a center based program that helps the families find services, employment and eventually a home.  The churches involved house and feed the families for a week or two at a time on a rotating basis.

I have provided meals in the past. It's always such a heartbreaking experience to see young children homeless.  And yet there they are so excited to go out for an Easter egg hunt.

It's really hard to accept that there are these kinds of homes for sale in the general nearby area: 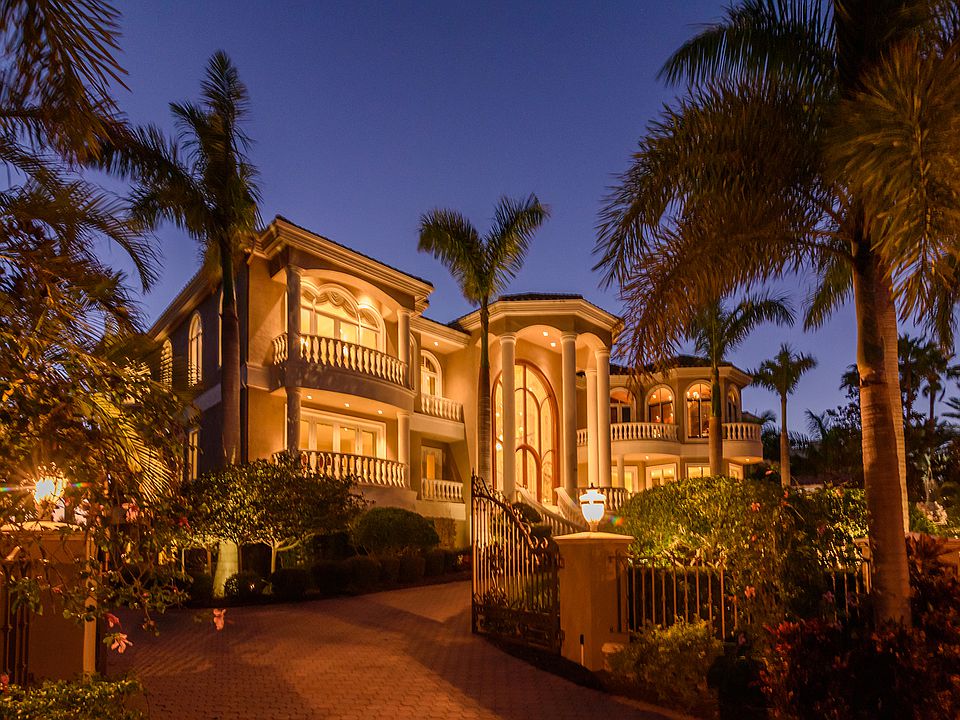 while affordable housing is so hard to find.

Then I heard about the bombings in Sri Lanka.

I spent the afternoon at the beach to ground myself. Beautiful, but even then I had to think about how an extended red tide outbreak in the Gulf and a green algae bloom in the Okeechobee water system that impacted the state last year.
Life is fragile.

Guess it's time for me to fix myself a Prozac cocktail. Or at least sit down and meditate for an hour.

Oh, dear. The Spector of Socialism is freaking people out (mostly Republican people?) -- Bernie Sanders (well he claims to be a Democratic Socialist but he has money!) and AOC and other freshman Congress people -- what is this country coming to??

It's pretty clear that the Russian government interfered with the last presidential election. Now I am old enough to remember the cold war years and how it was clear that the Communists were our enemies and not to be trusted.

Maybe I felt that more keenly than some because my mother was Ukrainian, a part of the USSR when I was growing up. I remember a well meaning neighbor suggesting she tell people we were Polish because she knew a Polish woman who was very nice, but it definitely was not okay to be Russian. (Not a lot of diversity in Vermont in the 50's and 60's.)
And even though I was little I must have picked up some vibes of the McCarthy era from my parents' watching the news. My father made no secret of his intense dislike of Dwight Eisenhower (a personal thing from the war) and I distinctly remember having the fear of men in suits who might knock on the door and take my parents away.


So I really don't understand the complacency (mostly among Republicans?) around this issue of foreign interference in our election process.

It's okay to put people coming across the southern border seeking safety and a better right into lock ups but let's not say anything about an outright attack by a foreign government. And also let's pretend that our government never interfered in the politics of those south of the border countries either.

I find it is getting harder and harder to sit down and write a blog post.

Of course, for the past two weeks I was busy with my friend Don who was on vacation here.
He is still working, not eligible for retirement until next year -- five and a half years younger.
Does that qualify me for cougar status?

Well, we had a good time together and even talked a bit about next steps for the relationship.
And now I feel a slight bit blue because he has gone back home.

I did have a meeting with the poetry group I belong to here. There have been some people who came and went over the past five years that I have been involved, but a certain core group has become a very important base for me as part of my Florida life. My VT writing group is equally as important to me.

A week ago the church service was all music with brief essays on the theme of finding home. It has haunted me since because I started reflecting on that unsettled feeling around transition times. Do I know where my home is? Most of the time it is where I am at the time, but when I need to make the change I find it getting harder and harder to be pulled in two directions.

I think it is time for reflection and decision.
Posted by Olga at 6:18 PM 11 comments: Links to this post