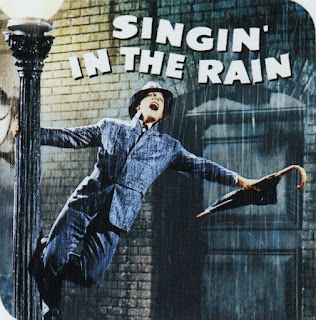 Sure, sometimes a little rain is a welcome thing but I'm thinking a lot of people are not singing about the rain that Harvey dumped.

I understand that parts of Florida are getting some residual rain from those stubborn bands swirling near the Gulf of Mexico.  So I have to confess that my heart did do a flipping kind of dropping kind of bounce when the phone rang and I recognized the name on caller ID.  It was the woman who does a walk through my Florida place on a regular basis.  She sent me a picture of a water stain on the ceiling in the laundry.  It must have been from the weekend.

So I probably didn't sound to happy when I said hello, but I am so glad I have someone who can keep an eye on things for me.  She recommended a roofing company.  I called and they inspected and will do the job soon.  It will be a big expense.  Florida weather is not kind to manmade structures.  It is windy, the sun beats done (it's 91 degrees there today, "feels like 106") and then it rains.  What can I do but have a new roof put on?

I was thinking about a new car, but the old one still runs.  Priorities -- needs over wants.
Posted by Olga at 12:14 PM 14 comments: Links to this post

It was a beautiful day here -- plus sky, temps in the 70's with no humidity.  I went for a walk and wondered why one part of the country could be so genial while another could be in the midst of such devastation.  I am wondering how much rain is falling on my place in Florida.  I have heard there has been some minor (relatively speaking) flooding there.

But the beauty of the day distracted me as I took my walk.  I was noticing signs of the end of summer, the approaching of autumn. 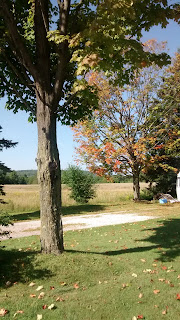 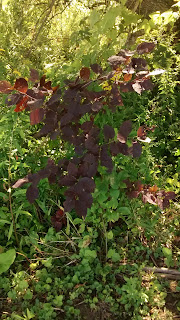 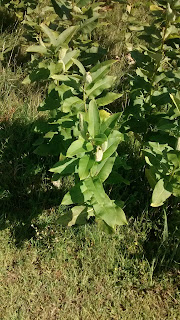 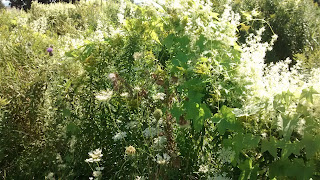 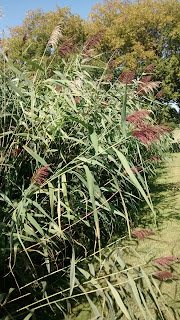 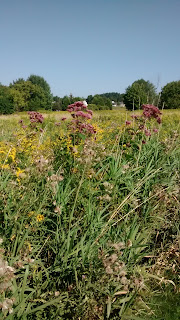 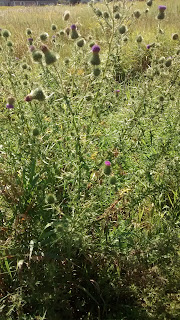 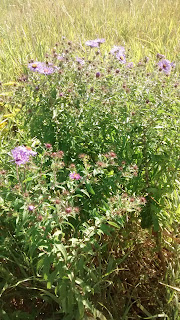 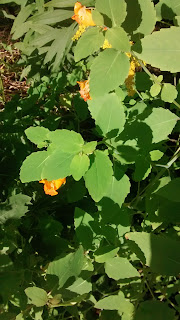 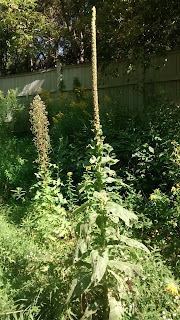 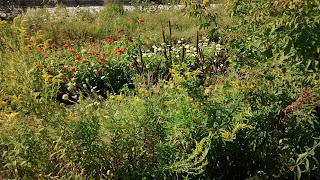 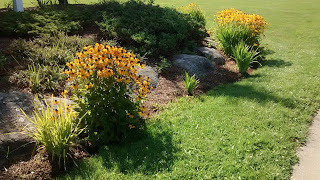 And some colorful garden flowers 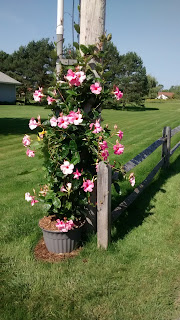 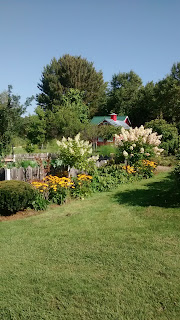 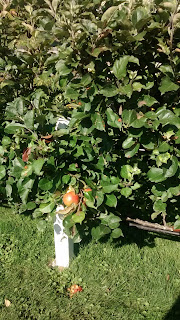 And a message to remind us that summer is indeed fleeting: 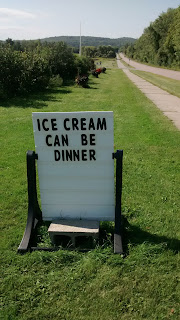 I did send notice to blogger and the problem of inappropriate items flooding my reading list seems to have been resolved.


One comment mentioned an Instagram account being the source of a similar problem.  I don't have Instagram.  But I do wonder about Google +.  That is an account that I don't even know how it even appeared and I consider it a possible source of the hacking.  I don't use it although I understand my posts show up there and I often get an e-mail notice about a very odd assortment of people following me (with two first names, two last names, mixed up names like Smith John, and mostly wearing military uniforms.  I suspect the names and pictures come from hacked accounts.)

Not loving the news about Harvey the Hurricane bearing down on Texas from the Gulf of Mexico.

I watched the movie Moonlight last night.  This is the movie that actually won an Oscar -- after it was announced that La La Land had won.  I have not seen La La Land, but I can say that, in my opinion, Moonlight certainly deserved the award.  It was a rough subject, but done both tenderly and artistically.  Perhaps not for everyone, but I thought it was an excellent movie.

A Massachusetts hospital worker won big in the Lottery -- 700+ million.  I can't even imagine.
She said she was going to go to bed and not get up for work in the morning.  I suspect she will buy a lot of gum (she was visibly chomping gum when I saw her on the news). I really can't imagine . . . maybe that is why I have never in my life bought myself a lottery ticket.

Local news: five special educators from the Burlington school district submitted resignations last night.  Teacher in-service starts tomorrow and students are in class next Wednesday.  These teachers work with students with the most challenging behavior problems and administrative support for the programs was cut in half.  Protest or self preservation?  I was a special educator for 33 years and all I know is that it was not getting any easier as time went on.

I had a problem with blogger.  My new posts stopped showing up in followers' reading lists.  It took months to straighten this out and I slowly started using the account again.

Now, even worse, my own reader list is filled with blogs from sites I do not follow.  I have not opened  any of the unknown sites but they small previews either don't make any sense or are about viagra.  Seriously annoying.

Does anyone know how to get real help?  I am tearing my hair out.
Posted by Olga at 8:06 PM 9 comments: Links to this post

The moose population in Vermont is being decimated.  The reason -- my nightmare: the tick.  Well, lots of blood sucking ticks actually.  Moose have been found with tens of thousands of ticks on them.
Tens of thousands! 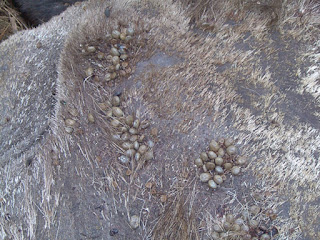 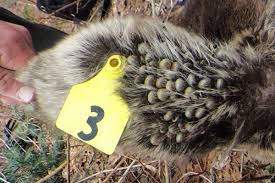 I had a couple of my friends over for lunch today,  The brought me this: 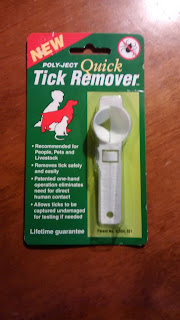 I am hoping I never have to use it, but I fear that will not be the case.
Posted by Olga at 7:13 PM 9 comments: Links to this post

I am home from my stay at the pond in southern New Hampshire.  I had a really great time. 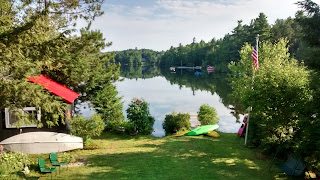 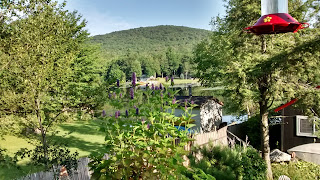 It was a very relaxing five days with my friend.  We met quite a few years ago on a trip to St. Martin.
She and her husband were middle school teachers and her husband and mine had many interests in common.  We had many good times as couples.  Now we are both widows having good times together, tinged with some nostalgia.

We walked around the pond, avoiding ticks.  We kayaked in the pond.  We drove to Peterborough Playhouse to see "The Producers" (which was absolutely spectacular, maybe the best summer stock theater production I have ever seen).  We played games and read.  We ate and drank a little wine.
We binged on "Land Girls." a Netflix series I can recommend.  And we talked and laughed and talked some more.

I didn't take my computer and I had no cell reception and the time flew by.
Posted by Olga at 6:52 PM 11 comments: Links to this post

Off for a Visit

I am packed and ready to go visit my friend Diane.  She has a home on a small pond in southern New Hampshire.  We arranged this visit when Diane was visiting me in Florida and I have been looking forward to it . . . Until I had Lyme disease.

I am still looking forward to seeing my friend of course.  But she lives in the woods and we have always hiked there.  Now I have images of ticks lurking on all vegetation.

We shall see.  Will neuroticism take over and strand me in the cabin for the week?  Will I be braver than that?  Will any lingering effects (Although I feel fine now.) prevent me from keeping up with my most energetic friend?
Posted by Olga at 8:13 AM 11 comments: Links to this post

This prompted me to get out knitting needles and yarn to make booties and baby hats. 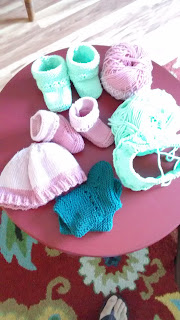 I also started working on a crib quilt.  The fun part is done, now on to sandwiching and quilting.
I am not a very advanced quilter -- stitch in the ditch is may speed. 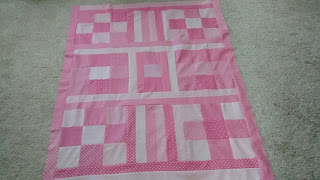 I know it is cliche to pick pink for a baby girl, but I love pink and I can't help myself.
Posted by Olga at 9:53 AM 11 comments: Links to this post