I got my flu shot today at a local pharmacy.  My new medicare card gave them fits, but after three people worked at it, it finally went through so I didn't have to pay out of pocket.

Did I already say I was rear ended in traffic? I was not hurt, but my new car!!! It will be fixed and the kid's insurance has accepted liability.  I strongly suspect texting and driving was a factor.  The problem now is that I spend so much time worrying about the car behind me that I am afraid I will end up rear ending someone.  Life is hard.

Some have accused me of having way too much time on my hands: 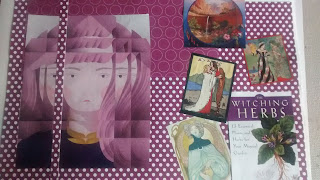 Purple page in my art journal 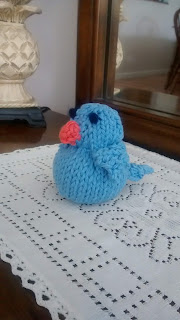 Knitting a blue bird.  I don't know why. 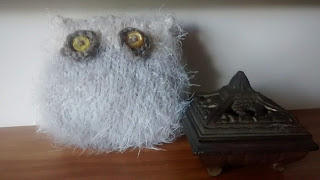 It stopped being hot very quickly.  The leaves are starting to turn and day time temperatures have been in the 60's.  It's as though a switch was thrown on the autumnal equinox. I  put away the AC unit and dragged out a blanket.  And I got to use my bright yellow rain jacket for the past two days, but I didn't bother with my bright yellow boots because it was a steady but not too hard rain.  It's dark earlier and earlier now. Fall is definitely in the air.

Kavanaugh is proclaiming his absolute right to his choir boy status because he was a virgin through high school and college?  He doesn't realize that may not be an adequate defense against a charge of attempted rape, or for that matter, a charge of exposing himself.  Is it any different than Bill Clinton saying, "I did not have sex with that woman."

And of course there is his stack of calendars and no where does it say "got blotto shit faced and attempted to rape a girl. passed out before I could complete the deed. better luck next time." Wow, convincing evidence! This is someone who could end up on the Supreme Court? And I, a mere woman, am too stupid to make choices about my own body? Good grief.

(Really, some people make it so hard to practice loving kindness.  So very hard.)

I was not popular or a big party girl in high school or in college, but I did manage to get to a couple of fraternity parties. He might have said, I don't remember that incident, but I can look back at my school days and childish ways and say I hope I have done differently since and I will dedicate my self from this point on to changing a culture that disrespects women. It was not a great time in our history and we need to not go back there.  But he didn't.  So I assume he is not that smart.

I think I might have some knitting to do.  I have to make a beak and some wings for my owl. 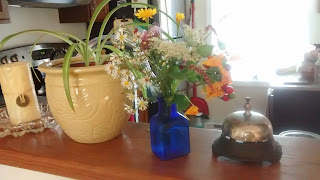 Wildflowers I picked on a walk down a dirt road.

The weather has suddenly turned cooler.  I was using the small AC unit in my bedroom right up until this past Tuesday when the temperature reached 90º and the humidity was about 90%.

I have had that little AC unit for years and I usually don't even bother to drag it out.  And if I do, it is usually just for a week tops that it get used in July.  But this was a hot and humid summer -- practice for if I ever move to Florida full time.

I was listening to a piece about Rachel Carson on public radio last Sunday.  I knew about her book Silent Spring and her warnings about the chemicals impacting the environment.  I did not know about her concerns about global warming.  She had started working on a book about that before her death.  She was charting increasing ocean temperatures along the eastern coast back in the 1940's and 50's.

There is an interesting article about Rachel Carson in the March, 2018,  New Yorker Magazine.
Posted by Olga at 9:28 AM 9 comments: Links to this post

SO Margaret of Straight Up - No Chaser recently posted a story that illustrated who she is.  Her story, her blog in general, is wicked funny and worth a read.  She did end the story with a "your turn" sort of challenge.

I have written about this before -- giving blood:


My first husband was a community spirited, giving back kind of guy, and that is extremely admirable. He may have gone too far, though, when he convinced me, many years ago, to go with him to donate blood. As he pointed out at the time, I was young and healthy. I should feel a responsibility to help those in need. It was an easy thing to do. He did it on a regular basis. They give you juice and a donut when you are done.  A donut?  You should have lead with that! Okay, all ready. I went with him to the Congregational Church where the Red Cross was having a blood drive.


The volunteer greeting us at the door gave me a sticker: "Be nice to me. It's my first time!" Goody, a sticker. What am I? In first grade?

I was given some paperwork to fill out. Obviously, the purpose of the sticker was to prompt others, workers and donors alike, to say, "Don't worry. It doesn't hurt a bit." The person who handed me the paper work said exactly that.

A nurse pricked my finger and knocked a drop of blood into a little vial of some kind of liquid. I think the drop was supposed to sink to the bottom, but it just sat there until the nurse whacked the vial a few times and announced, "There it goes! Don't worry. This doesn't hurt a bit."

So I stretch out on a cot. I hate needles so I look away and close my eyes besides. The nurse says, "Just a little prick and it won't hurt after that." Don't think I didn't notice the change in tune from "just a little prick" to "after that is won't hurt."

The nurse walked away after that little prick and I was left there thinking, "Damn! This does so hurt! A lot! It hurts a lot!"

The guy on the next cot asked me how I was doing and I said aloud, "I don't care what they say, this hurts."

"Oh!" he said. "Oh, nurse! Come here, please. Something's wrong." That's when I looked. There was a large purple mass growing over my elbow. The needle had pierced my vein and the blood was just puddling under my skin instead of going into the collection bag. The nurse pulled out the needle. If she said something soothing, I didn't hear it. What I did hear was her asking me if she could try the other arm.

"Good god, NO. Give me my donut and let me out of here!" Use my other arm? You've got to be kidding me. What kind of sadistic medical professional would even ask me something like that?

Call me selfish, but I happen to be using all my blood. That's how it's gonna stay.


I am glad that our trip to Boston was on Monday and that we did not feel tempted to linger for a few extra days.  We drove through this area on the way back to Vermont.
multiple-gas-explosions-set-more-than-homes-ablaze-across-three-communities-north-boston

I am feeling a teensy bit nervous about the natural gas heat in my condo.

We did learn about this Boston incident while we walking near Faneuil Hall.

Uh Oh.  Manafort set to cooperate with the Mueller investigation after more charges are brought?
I guess loyalty can only go so far.

Although I have to say I marvel that loyalty to a sinking ship has gone as far as it has by so many.
But that's just my own opinion.

My heart goes out to anyone in the path of Florence.  I have been the Cape Hatteras and to St. Martin  within four to nine months after hurricanes had passed through.  It is almost incomprehensible how much damage wind and water can do.

I do have to wonder if Trump actually does truly believe that his brief presence in Puerto Rico was all that it took to keep the hurricane Maria death toll at the 16 or so number he was given at the time.  He knows no shame.  But it takes a big man to admit his mistakes, so Puerto Ricans best not expect any kind of apology.

Closer to home, there was a single car crash on a dirt road near my condo, a place where I frequently take my exercise walk.  A teenage boy was killed.  It was his mother's car, but it was being driven by a 15 year old friend.  He had to have been driving illegally since he is eligible for only a learner's permit which would require someone over the age of 25 to be in the passenger seat while he was driving.

And speaking of teenage drivers, I was rear ended by an 18 year old kid the other day.  No one was hurt and both cars still run but there was body damage to both vehicles.  He jumped out of his car with his phone in his hand so I am gonna go ahead and assume he was texting.

It's a dangerous world out there, people!!

I had a doctor's appointment in Boston. (Aren't there any ENTs in VT?)

I had promised my granddaughter a shopping trip for her 17th birthday (which was in June) so a trip to Boston seemed like a good way to cash that one in.  We left on Sunday and stopped at the Mall of New Hampshire in Manchester before tucking in for the night.  Oh, yeah we had dinner at the Lobster Boat in Merrimack -- lobster rolls and French fires.  We like our lobster rolls Connecticut style, butter instead of mayo, and they accommodated.  It was a very good restaurant with everything tasting and smelling very fresh.

We spent the morning seeing a little bit of Boston.  Kristen did some more shopping and we had a lunch that spanned several of the food vendors at the Quincy Market.

Performer (who wanted $20 from each onlooker) 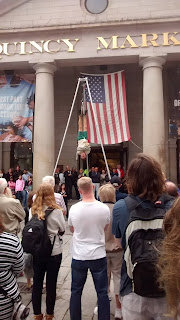 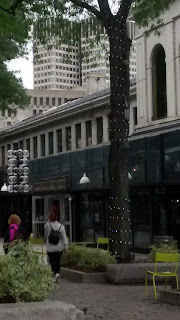 It was pretty gray, but the rain held off til later. 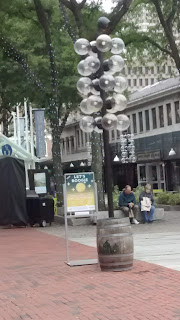 My doctor's appointment was supposed to be at 2:30, but the doctor was running late.  I was finished with  exams, scans, explanations and options around 5.  Woohoo!  Just in time for rush hour traffic and the heavy rains hitting.

I didn't get to my daughter's house until almost ten.  It took a good hour or more to get out of the greater Boston area and we did stop for gas and something to eat.  I decided to stay the night.  My grandson offered to sleep on the couch so I could sleep in his bed, but the couch was fine for me.  One of their cats plopped itself on top of me but it didn't disturb me.  I was out like a light in no time.
I think Kristen may have taken a second day off from school for recovery.

It was still raining for my drive home (another hour and a half+) but daylight made it a lot easier.

So there were some glitches, but on the whole, a good trip.  I like Boston, but I am glad I don't live there.
Posted by Olga at 6:53 PM 11 comments: Links to this post