Recently it got to the point where the most frequent communication to me on FaceBook was, "Just got another friend request from you.  Change your password, you've been hacked."  I know it happens, but three times in six weeks.  I simply have run out of ideas for passwords.

And you know what?  It's nice to go out for a morning walk or a bike ride instead of being glued to the computer screen.

I am also running out of steam for blog posts.  So, time for a vacation.  I will check in on my reading list from time to time and maybe post on my Act 3 blog.

Perhaps I will start getting out more and find something worth blogging about here eventually.
Posted by Olga at 7:36 AM 9 comments: Links to this post

I am always striving for balance in my life, but today I am talking about physical balance. I often read that many people start to have problems with balance, seemingly as a consequence of aging.  Falls and resulting injuries (like a broken hip) can have a detrimental effect on the quality of life and even sometimes are implicated in deaths due to injury.

I am in the demographic -- according to the Centers for Disease Control and Prevention, over a third of those 65 years or over false act year.

Actually, I am well ahead of the curve.  I have been falling since I was two when I tumbled down the full flight of steep cellar steps and broke my nose.  When I was a little older my mother actually had me practice leading with my bum as I fell so I would not break an arm.  My mother had a dread fear of one of her children breaking an arm and she figured I was the most likely candidate.

I guess the early training worked as I have yet (knock wood) to break my arm.  I have bruised my bum though!

And I have taken some pretty spectacular falls, but I am not attributing any of them to age.  It's all about natural born clumsiness.  Still, I think it is a good idea that I take yoga and a balance Pilates class.

I have added mindful meditation to my routine as well.  I have not broken anything other than my nose, but I don't want to press my luck so I will do what I can.
Posted by Olga at 1:07 PM 9 comments: Links to this post

Confession: I struggle with a weakness for potato chips.

Well imagine my delight when I found these at the local Publix grocery store.
I was just so excited I had to share! 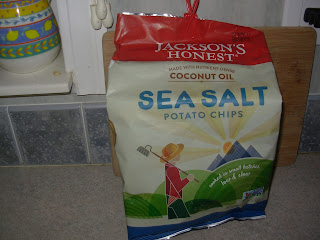 Alternative health food is a thing now, right?
Posted by Olga at 6:06 PM 13 comments: Links to this post

I signed up for some painting classes through Sarasota County's Adult Continuing Education Program.  Eight lessons for $130 -- can't really find a better deal than that.

The added bonus is that I did learn quite a bit.  I am not planning on quitting my day job and sailing down to the Florida Keys to become  a full time artist by any means.  However, I am finding that I enjoy learning something new and I enjoy painting enough to want to keep working at it.  Eventually I will turn out something I think worthy of hanging on my wall.

Yesterday, the subject was painting boats with a reflection in the water. 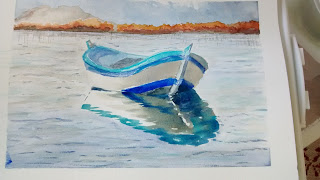 One more lesson to go in this series.  Unfortunately the instructor announced that he would not be continuing to through ACE.  I don't know yet whether there will be other classes but I plan on checking that out.
Posted by Olga at 7:20 PM 9 comments: Links to this post