This has been a very disturbing week. We got a call last Thursday that Mike's brother was in the hospital. Worse than that, that he was in a hospice room and not expected to make it through the night. We were able to say good-bye before he passed away on Sunday morning. Our hearts are very heavy and we are additionally burdened with unanswered questions.
Posted by Olga at 1:01 PM No comments: 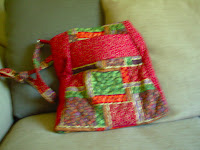 I whipped up this bag over the past two days. It's an easy See&Sew pattern. I guess if I get tired of it as a bag, i can stuff it with a pillow and leave it on the couch full time.
Posted by Olga at 5:20 PM No comments:

I found a couple of free knitting patterns* yesterday and got started on a layette for a Bitty Baby doll. Well, actually, since these projects will go to California, it means two of each item. Renee gave her nieces each a BB doll for Christmas last year. Gives the girls something to do; gives me something to do.
Before I go too crazy, I should find out if Gianna and Angela actually dress their babies. Kristen is all about the fashion for her American Girl and wants to learn to sew. Her mother, as I recall, was deeply into doll nudism. I was forever finding naked dolls around the house that I would immediately dress. When Amy went to play with them the first act was to take off all the clothes. I doubt that in the future her assemblage of naked, tattooed Barbies with punk hair shavings will make it to the collectible market. Frankly, that's as it should be though.
In my Internet searching, I also found a pattern on another blog, this one for an American Girl:
SockPixie: 18" Doll Summer Fun Ensemble (Free Pattern). It's really cute and I will definitely be giving it a go.
The Bitty Baby patterns are at: http://www.knittingonthenet.com/ --Bitty Baby Layette pattern by Janice Helge--and at www.woolworks.org -- Albert's V-neck cardigan by Maryanne Wilford.
Posted by Olga at 7:03 PM No comments:

Elizabeth graduated from high school June 5th and is now looking forward to going off to college in a few months. Is it just me, or do grand children grow up on a faster time schedule than other kids? In the blink of an eye, I tell ya.
We did not "gift" her anything, but don't think we are Grinchy old grand parents. We did send a card with a check and a silver keeper jewelry box.
Posted by Olga at 12:33 PM No comments:

Labels: Family, Is it just me?

Gloria Steinem was in Burlington last night and gave a talk (or as she called it--led an organizing rally) at the Hilton Hotel, sponsored by Vermont Woman Newspaper, http://www.vermontwoman.com/. I got to see one of my role models in person!

I never thought she had a very commanding speaking voice but she certainly has presence and still does at 75. She is so intelligent, both well and thoughtfully read, extensively travelled, compellingly accomplished, and carefully--if not forcefully--articulate.

It is easy to forget that there were few options for females back in my high school days--teacher, nurse, secretary. And if getting pregnant interrupted any of those three options, that was it. Married and a home maker or a year "visiting an auntie out west." I do remember feeling on the cusp of big changes. Birth control, WOW. Once we were discussing abortion in one of my high school religion classes. (I went to a Catholic high school and the sentiment was strongly against the concept of abortion.) I offered the opinion that abortion was an extraordinary step and even that i understood the arguments against it, but it seemed a simple solution to preventing abortion would strong support for birth control. That went over like a fart in church let me tell you.

It is scary, though. Basic human rights make an advance and then there is a back lash. Just this week a doctor was shot while because he performs abortions in his practice. The terrorist attack took place while he attended church, not while he was practicing medicine. Support life or we'll kill you, that's a coherent philosophy.

Anyway, Gloria Steinem was awesome and i am going to subscribe to Vermont Woman.
Posted by Olga at 10:55 AM No comments: 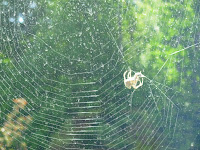 The spider is making short work of an unlucky fly here. This view from our front window is the reason I cannot wash the window and feel that spring cleaning is complete. Fortunately she is on the outside and if she keeps the bug population knocked down a bit, we will let her stay there.

An 18 year old boy from Massachusetts was arrested and put in jail with bail of $10,000. The crime, according to a short blurb in the Burlington Free Press, walking out of a supermarket with a stolen can of Cheese Whiz in his jacket. Is it just me, or is that harsh? Surely there is more to the story that didn't get reported. Was he planning to board an airplane with contraband cheese product in not quite liquid but not quite solid form? Is he a known graffiti artist who works in edible medium? Did he steal a vehicle from the parking lot, using a shot of orange cheese to intimidate the driver into turning over the keys? Because that is some expensive Cheese Whiz.
Posted by Olga at 4:33 PM No comments:

Labels: Is it just me? In the news 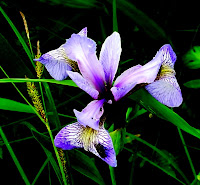 When did we all stop giving and start gifting instead?

"My friend gave me a book for my birthday" has been translated to "My friend gifted me a book..." I'm sorry. That just plain sounds wrong.

It is better to gift that to receive. Admit it--just sounds wrong. That's what I think.
Posted by Olga at 12:03 PM No comments:

Labels: Is it just me?

My grand daughter is into play dates. This is a new concept for me. I seem to remember just meeting friends outside and going off to play--sometimes at some one's house but mostly just outside. Our back yard was a common place for a baseball game. There was a skating pond and a sliding hill in winter. We knew where to go to pick berries or ride bikes to the swimming hole in the summer. It being pretty much the same when my own kids were young, but I do believe as a parent I did have a better idea at any given time where they actually might be than my own parents did when we were growing up. There was a book written by Robert Paul Smith in 1957--Where did you go? Out. What did you do? Nothing.--that pretty much sums up the "don't tell" attitude of my generation.
Anyway, playing now has to be scheduled into a kid's day. You can order "parent cards" handy for handing out to other parents so that play date arrangements go smoothly. I'm sure you can make them yourself if you're into that--which I am kind of. Hey! An idea for homemade gift giving.
Posted by Olga at 11:33 AM No comments:

Labels: Crafts, Family, Is it just me?

Writing and reading about rhubarb reminded me of a family story. My parents lived with my maternal grandfather when they were first married in the mid to late 1940's. My mom had made a rhubarb pie and both she and my dad had a piece for dessert that night. Maybe two more pieces got packed up for lunch pails to take to their jobs the next day. In the mean time, my grandfather was left alone with the left over pie. He cut himself a small sliver some time during the night and then another to go with his breakfast. He had a larger piece with his lunch and then made two or three trips back for "slivers" as he puttered around the house and yard.

Now, my dad loved pie. He worked hard in the coal mines at this time and getting toward quitting time he started to wonder what there might be for supper. He started really looking forward to the piece of rhubarb pie that would conclude that supper. Imagine his disappointment and dismay upon returning home to find an empty pie plate sitting on the kitchen counter. His cry of, "Who ate ALL the rhubarb pie???" rang through the house.

At this, my grandfather looked up from his evening paper in equal dismay. "Rhubarb pie? Some one should have told me that was rhubarb pie. I don't like rhubarb."
Posted by Olga at 5:15 PM No comments: