Thanks for the thoughts of concern and caring, everyone.

I asked a friend to come by and look to see if I had a tick bite.  She was sure it was a bite, but maybe not a tick.  She took the picture and showed it to her husband who grew up in tick country.  He said, "definitely a tick bite." So she called me and suggested (ordered😀) I go to Urgent Care.

I went to the Urgent Care and announced to the nurse and then the doctor there that I had thought I had the flu but then I noticed this (turning and lifting my shirt). The nurse said, "I'll get the doctor, but I don't think you have the flu." The doctor then heard my tale and said, "That is definitely A Lyme rash and since you are reporting fever and other flu like symptoms, I am calling in a prescription for Doxycycline hyaclate immediately. You don't have flu."  So there were questions and answers and then I stopped at the pharmacy on my way home and took the first dose.

The doctor did not feel the need to take blood.  She thought it was early enough that antibodies might not be active yet but I was getting the antibiotic anyway so it was kind of a moot point.

My sister-in-law, who had Lyme's disease last summer, said, "Meet sleep, your new best friend."  That pretty much sums it up.  All other plans put on hold for the immediate future.

I took the kids to a Lake Monsters ballgame Monday night.  It was 25 cent hotdog night.  7986 sold, but I was not tempted.  Kristen wouldn't eat a hotdog except at the ballgame and Dane had two.  It was crowded, but the game was a good one although the LM lost 4-5.

We got home at 10:30 and all of a sudden I was dead tired.  I slept until ten in the morning, but The fatigue was coming at me waves.  And I had chills and fevers.  I basically stayed in bed for days.  I was blaming it on the crowd and germs of a a crowded public place.  I thought I had flu.

But, know what else causes aches and pains, severe headache, extreme fatigue, and mental fog? Lyme disease from a tick bite.  I have this unreasonable dread fear of tick bites, one.  And two, I noticed this this afternoon: 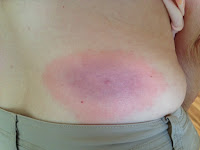 That's god-awful nasty looking.  Or I could try to pass it off as a watercolor bloom tattoo?
Posted by Olga at 6:01 PM 9 comments:

Not mine, I should hasten to say.

My friend Ginnie. I would call her Humpty Dumpty but she falls and breaks bones rather than an egg shell.  I went with her to a follow appointment for a broken wrist she suffered almost a month ago.  She was to have a consult with a specialist about whether or not she might need surgery.

The waiting room was filled with people with casts and bones in various states of healing.  I noticed (and this may be a gross overgeneralization, but it seemed true that day) that people with broken bones can be quite gregarious.  It was like being at a party, everybody chatting and sharing the gruesome details of their injuries, mingling as they moved from waiting room to x-ray department, calling cheery good-byes when they were whisked into the doctors' offices.

Well. in absorbing all this, I picked up a valuable tip.  I learned that it apparently a good idea to cover a cast when taking a shower.  You can fool around with plastic bags, but that is difficult if you don't have someone around to help secure it and even then it might fail.  I learned that there are covers you can buy at a medical supply place, but these are quite pricey.  So here's the tip revealed by a young woman who was comparing arm casts with Ginnie:


They are relatively inexpensive -- ten for 12 bucks.  They come in colors!

I hope I never have to use this tip.  I hope you never have to either, but now you know.  I should post this on Pinterest.
Posted by Olga at 9:48 PM 10 comments:

I took my grandson to a baseball game last Friday night.  We went to see the Lake Monsters.  Their home venue is Centennial Field in Burlington.  I think there is some kind of connection with the Tamp Bay Rays, but I am not so clear on how that all works.

My grandson enjoys going to the stadium and he knows enough about the game to follow the action.
Although there wasn't so much action at that game -- Vermont won with a run in the 15th inning. I suppose that is what they call a pitchers' duel, but it seemed like bad hitting to me (lots of fly balls and fouls).  But the experience is all about being in the stands, having a hotdog, and cheering along with the crowd.  We will go again.  It's fun and affordable. 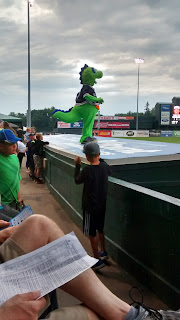 Dane had some money burning a hole in his pocket.  He bought a foam paw and a Lake Monster stuffy: 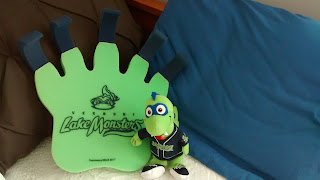 He did not want to take these items home with him on Saturday.  He said he wanted to leave them here at my place "to decorate my room."  When my son moved into his own place last year, I thought I was gaining spare room but Dane definitely thinks of it as his very own home away from home.
Posted by Olga at 9:17 AM 5 comments:

I had a pleasant Fourth spent with friends.  We watched a parade, had chicken barbecue, and took in the fireworks.  I enjoy watching fireworks.  A friend from Florida sent me a picture of the light show put on in Venice. 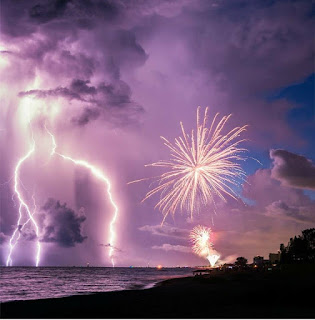 Mother Nature was not going to be outdone!
Posted by Olga at 6:56 PM 9 comments:

My condo has a teeny tiny kitchen.  It has what I need to cook for myself although some might find it lacking because I do not have a microwave.

I had a small coffee pot -- one of those Mr. Coffee kind that made two cups even though it claimed to make five.  That was fine as I seldom to never drink more than two cups.  Unfortunately, I cracked the carafe and I could not find a replacement at nearby stores.  I bought a new coffee pot instead: 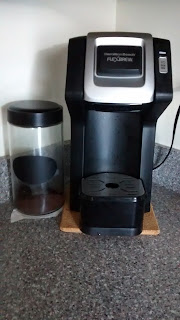 My son worked for Keurig when they first came out with those K-cup things and I said, "What a waste.  I would never own one of those things?"

Well guess what.  I can now use K-cups to make my morning cup of coffee.  This coffee maker did come with a reusable filter so I fill that and enjoy my magic wake-up elixir. But it does have a cup that can be used for the individual pods. 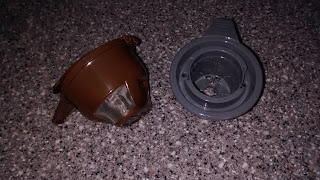