Once a month or so a bunch of us get together at my friend Donna's house to make cards.  She has a large, dedicated craft room with a table that accommodates the nine or ten of us who gather to chat, laugh, eat, and make a few cards.  We range in age from 18 to 97.

I took my grandson to one of these gatherings once and he whispered to me that he would be sent to time out for the type of shenanigans that were on display.  Some of these women could be stand up comedians.  The get togethers can be rowdy, even a little raunchy.

It's fun and we do make some nice cards.  This weeks selection: 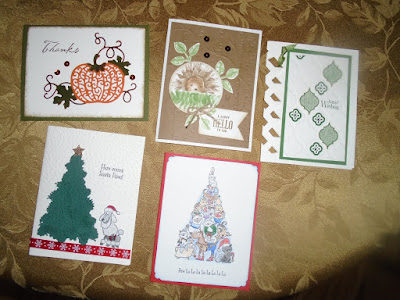 I saw an ad for a nearby "Oktober Fest."  It's being held this weekend, September 22 to 24.  Am I missing something.

Am I missing something?  This confused me.

We had a fairly chilly and wet summer.  Now that autumn is officially here the weather prediction is for record breaking heat over the next couple of days.  They are reminding us that the lake temperature is still swimmable.  I have been enjoying the nice weather but I still am somewhat unsettled by all the extremes and tragic weather events elsewhere.

I have been wishing I could get a new car.  Actually, I have only ever had a brand new car twice in my life and they were the two worst cars I ever had.  The Saab I bought was an out and out lemon.  So I am really looking for a new to me car.  Anyway, I was looking at some cars on line, reading an AARP article about good cars for those of a certain age.  I had never even heard of the Ford C-Max, so I made an inquiry about it.  I am now the best friend of every single car dealership in northern Vermont (at least until they figure out I will not be buying a car from each of them).

Maybe it is just me but I think that if Kim Jong Un is calling you mentally deranged it's time to take a good hard look in the mirror.  Two arrested development world leaders cannot be a good thing.

Oh, well.  I head that the world was going to end this weekend any way.  In preparation I polished off a container of Ben and Jerry's ice cream (actually frozen yogurt).  I really try to avoid dairy so this was waiting for a visit from my grandkids, but what the heck.  I couldn't let it just go to waste.  But if the world doesn't end it will go to waist.

I don't understand the artificially colored versus naturally colored Trim cereal.  Why is anyone eating Trix at all?  Really, sometimes I think there is no hope for this country.

This post was inspried from a post by Cranky Old Man about watching movies backwards.  I have no memory of watching a movie backward but the post, as so often is the case, was quite amusing.  However, what caught my attention was the use of the expression "back in the day."

My ten-year-old grandson uses that expression.  Grandma, did you have television back in the day?
Oh, yes, I knew of televisions of a primitive sort.  We had one. One! And my parents (but mostly my father when he was home) had total control over it.  There were cartoons on Saturday morning and Captain Kangaroo on week day mornings but certainly no channels dedicated to kids' viewing 24/7.  The picture was only in black and white.  Programming went off the air for the night.  The horror!

Grandma, what video games did you play back in the day? Oh, the inhumanity!  There were no video games, no hand-held devices or computers.  The one phone in the house was connected to the wall and was used sparingly to talk with someone and with respect for the others on the party line (beyond imagination).  Games were played on boards on the table or outside.

Grandma, what did you do all summer back in the day?  I woke up, had breakfast, and went outside to play.  If I got hungry or hurt I went inside and my mother would give me lunch or put a bandaid on me and send me back outside.  Otherwise I was free until called for supper.  I met up with friends and we played kick the can or Red Rover.  We played cowboys or soldiers if there were boys around or we played with dolls.  We rode bicycles.  We went in the woods and threw rocks in the brook.  We climbed trees.  On rainy days, I might go to a friend's house to play, but mostly I stayed in my room and read so my mother wouldn't hand me a broom or a dust rag.  Beyond comprehension -- You saw your friends everyday? Without a play date?

He can keep up a steady stream of questions.  That coupled with the expression "back in the day" can become very annoying.  (Once he told me my amygdala was becoming excited, but that's a whole different Dane story.)

Sometimes I take Dane to Al's French Fries.  His comment, very apt and I don't believe he has ever seen that Youtube video and which he makes with a kind of nostalgic sigh: I love this place.  I think it must be exactly like things were back in the day. 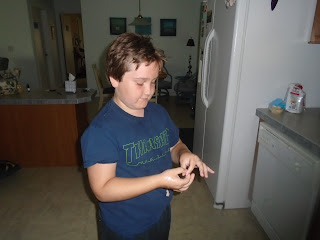 In the Wake of Irma

If you have a place in a popular vacation spot you can pretty much count on visitors coming to call.
As we all know, some visitors are far more congenial than others.  Some visitors are the type you can't wait to be rid of -- some visitors like Hurricane Irma.

At first it looked as though Irma would head up the center of the Florida peninsula.  Then it shifted to a path along the west coast and my concern for property escalated.  I watched the Venice weather -- mandatory evacuation of the island part, hurricane warning/watch, storm surge warning, flash flood warning, and, to top things off like a cherry on this disaster sundae, a tornado warning.   Water was shut off in Venice due to a broken main.  In the end, Irma downgraded and wobbled, leaving external damage but structures mostly intact.

My bougainvillea was damaged.  That thing is more or less a weed.  It has an ardent will to survive and no doubt will thrive once again.  The frangipani was uprooted.  I am not sure whether it is salvageable or not.  It is beautiful in full bloom, when I am not there to enjoy it.  Through the winter months it looks like a strange leafless shrub that Dr. Seuss might have drawn.  I am not entirely sure I want to salvage it.

I have yet to hear about anything inside related to the leak in the roof.  I will make a trip down to deal with that once hurricane season has settled down.  I surely hope it will soon!

Some pictures from the news: 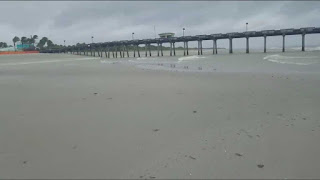 Fishing pier at Sharky's showing how the gulf waters were sucked back out by the force of hurricane winds, preparation for the surge.  This is four miles from my place.  Surge was less than was predicted at first. 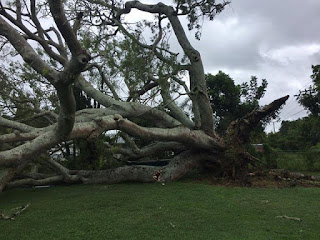 Looks like palm trees just decided to take a nap in Sarasota! 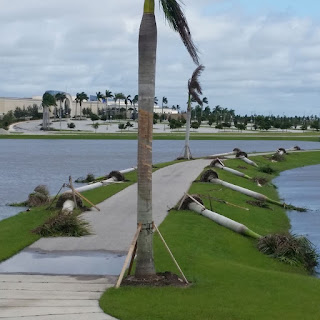 It seems certain that Irma will hit Florida and travel up the center of the state.  Florida is a peninsula.  The damage is likely to affect both coasts.

My roof is not fixed yet.  It's not going to be fixed before the winds and rains come.  I can only be grateful I am not there and hope for the best.

I was seeing the traffic jamb as people were evacuating.  There are always those who refuse to evacuate.  I am thinking about those who are on island countries.  They can't just jump in cars and leave.  Scary stuff. 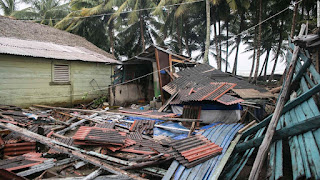