Margaret at Straight Up -- No Chaser often makes me laugh. Today she wrote about her need for laughter and something that she and Rick call up that gets then laughing every time. It was an incident that is really not funny on the face of it, but the image sure made me laugh.

I have been guilty of inappropriate laughter many times. 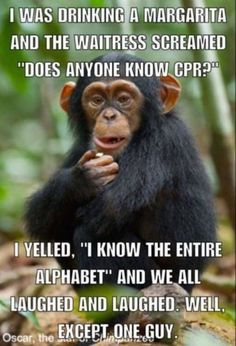 I wish someone would just stop me when I decide to research certain subjects.

Gelastic seizures (GS) are a rare form of epilepsy characterized by inappropriate, uncontrolled laughter. They are highly associated with abnormal cognitive development and behavioral problems in patients. NBCI

Pseudobulbar affect (PBA) is a condition that's characterized by episodes of sudden uncontrollable and inappropriate laughing or crying. Pseudobulbar affect typically occurs in people with certain neurological conditions or injuries, which might affect the way the brain controls emotion. Mayo Clinic

It may not be all bad though.

In some situations, inappropriate laughter may be our brain's way of breaking anxiety and tension — a built-in coping mechanism to diffuse bad vibes or stress. ... Nervous laughter could simply be an involuntary and instantaneous attempt at self-prescribed laugh therapy.

On the plus side, this is most likely happening because your brain needs to diffuse the anxiety triggered by upsetting things, and therefore you are probably more sensitive, not less, than people who have their shit under control. Use this line, it is likely your best defense.

So, yeah let's go with that last one. 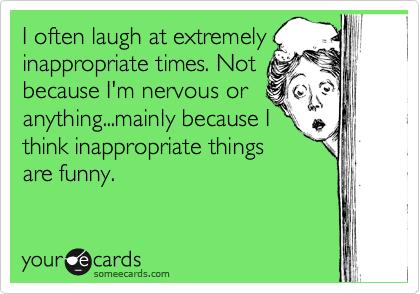 This incident makes me laugh every time. I wasn't even there but the image is so vivid that I can't help but crack up when I think of it. It's a relatively mild example of my sick sense of humor.
A friend of mine was having a crisis of the soul. Everything in her life was going wrong. I think I was listening fairly compassionately until she got to this --
She was shopping in an old mill that had been converted to all kinds of small shops. There was a tiny store that sold sock and she was looking at them. Now my friend is a big woman and she was wearing a puffy down coat and she started to feel claustrophobic. So pushed her way out of the store in near panic and sat down at a nearby coffee shop. She ordered a cup of coffee. When the waitress brought it to her, she happened to look down and noticed that little pairs of socks were attached to the velcro closures on her open coat.
That just made me roar with laughter. When I could speak, I pointed out that her day could have been much worse. The sales clerk in the sock store could have called the police and reported her for shoplifting. My friend didn't see the humor in any of this but she is a good friend who understands me so she cuts me some slack.
Posted by Olga at 11:12 AM

I laughed at the description as well. How could you not? I'm sure she was just feeling too down at that point to see the humour but maybe she sees it now.

I recall sitting at my aunt's kitchen table a few hours after my uncle died. There were several of us there, my mom and aunt and a few of the cousins and I, and we started sharing stories about Uncle Bob. I don't recall what they were but at one point, we were all laughing. It felt good to release some of the grief though I'm sure anyone who had seen us would have thought it inappropriate.

Olga, great post!! DH and I were just recently discussing what makes people laugh.... usually it's always something unexpected and/or inappropriate. I checked out that other site you mentioned. Made me laugh more. I do think it's a way we release tension... and that it's good for us. IMO sometimes people can be too sensitive. It's possible to see the humor even in serious situations. And of course timing is important... something might be considered funny later that isn't at all funny at the time.

Well, that was pretty funny, I agree.

Mine usually comes over me at funerals. Trying to suppress inappropriate laughter just makes it worse. I like that more sensitive theory and plan to borrow it.
Did your friend ever see the humor maybe in retrospect? Too bad you didn't have a cell phone with you to record it.

It happens to the best of us, we all need to remember to give some slack to each other every now and then. Its good for the soul.

Margaret (Peggy or Peg too) said...

See now that's funny. I'd have laughed too Olga!

Well, as you're demonstrating, laughter is the best medicine.

I got a call and don't think I finished my comment.

I thought the same thing. Call 911 immediately. As for laughter, it is good for the soul. It releases endorphins, dulls the pain, and elevates your mood. We should have a laugh fest. Laughter is contagious. One person laughs, and everybody laughs, too. Wonderful post!

I'm all for inappropriate laughter! Some of life's funniest things happen by mistake and at the worst times.