That was the report that went out to warn those on their way to work on Friday morning that I-189was closed.

Here is the motor vehicle problem: 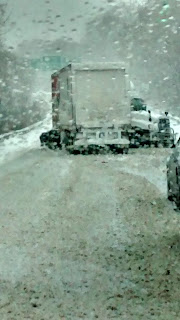 A semi jack knifed and blocked the west bound lane.  I didn't see it happen but I did arrive on the scene early in the process.

I had planned a weekend with family in Connecticut and I didn't want to give it up, but the roads were so bad I was making up my mind to get off the highway and go home until it stopped. Instead I sat there for two hours. 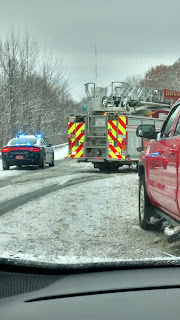 Special equipment had to be brought in to move the truck. No one was hurt. I had a good book.

The young man behind me had one of those heavy on the bass speakers and a good supply of rap music he was willing to share with those around him so that was good too. (She said somewhat sarcastically).

The snow stopped before the fire truck and police car got there.  By the time we were waved on past, the roads had been salted and plowed. I was on my way with no more problems.

It all works out in the end.

Safe travels over the holiday.